Phnom Penh located on the banks of the Tonlé Sap and Mekong River, Phnom Penh has been the national capital since French colonization of Cambodia, and has grown to become the nation’s center of economic and industrial activities, as well as the center of security, politics, cultural heritage, and diplomacy of Cambodia. Once known as the “Pearl of Asia,” it was considered one of the loveliest French-built cities in Indochina in the 1920s. There are numbers of surviving French colonial buildings scattered along the grand boulevards. The city is the wealthiest and most populous city in Cambodia and is the country’s political hub.

– Explore the charming city Phnom Penh
– Intro tour by Cyclo for about 30 minutes
– Day out to the outskirt of the city and tour to Tonle Bati and Phnom Chiso
– Visit Cheoung Ek and Tuol Sleng, (the massive graves during the Khmer Rouge time)

There are no reviews yet. Be the first one to write one. 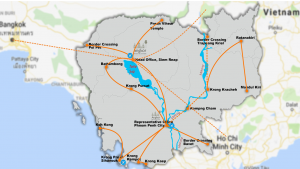 Click on the button below for detailed Trip Notes containing all the particulars about this trip, including kit lists and practical information.

Note: these can vary by departure; you can check out the specific Trip Notes for your chosen adventure on the dates & prices page.

Don't have an account yet? Register Now
Thanks for your time to let us know from your travel experience.